The Race to Mars 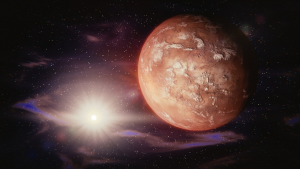 Alongside America and Russia, the main contenders in the race to Mars include China, Japan, India and the European Space Agency, which all have sophisticated space programmes. NASA has had great success with previous Mars missions using its robot Rover, but pulling together the seemingly impossible – the first 2 year, manned-space mission to Mars – will be no easy task. Aside from the trillions of dollars in investment needed to finance such a mission, there are significant logistical hurdles to overcome.

A sophisticated box of tools required

Mars is about 3 light minutes from Earth, and communication between spacecraft headed there and ground control is significantly delayed. It’s essential that the chosen spacecraft has software capable of thinking for itself and making tactical decisions on its own. AI based systems are already a core feature of NASA’s space programme. They cover space flight navigation, land-based robotic telescopes that can detect subtle phenomena, such as a blinking star; satellite technology that can pick up ground-level features about an inch in size; and a new generation of humanoid robots.

The Robonaut concept is currently being developed in partnership with GM Motors, and the use of advanced robotic technologies will help NASA to launch into a bold new era of space exploration. However, we still have the problem of gravity to contend with, we’ve yet to master the speed of light or learnt how to dodge collisions with interstellar material. It seems, humanity’s expansion into space will be a gradual one. But is it necessary?

There will be cynics who will question the need for the first manned mission to Mars, at a time when we are making such a mess of things on Earth. But humans have always been driven by the fundamental questions: WHO ARE WE? WHY ARE WE HERE? ARE WE ALONE IN THE UNIVERSE? To choose the status quo over seeking answers to these fundamental questions is not progress.

If humanity is to have a future then we need to be able to advance in new directions, including deep space. We should not forget that there is always a human cost when we step out into the great unknown. Many of the space pioneers who will participate in this space odyssey will be risking their lives, as portrayed in films such as Mission to Mars (2000), and more recently Martian (2015). We need to honour these courageous men and women. They represent the best among us.

Calling all Dreamers of Dreams!

Dreamers of Dreams Film Festival invites filmmakers to submit shorts and features with a sci-fi, experimental or fantasy theme. The festival will be held in London, in November, a city known for its diversity and innovation in the creative arts.

Amy Lennox and Florence Bell are two amazing actresses that have featured in indie films curated recently by NRFF and have won awards. NRFF are currently accepting submissions, and have consistently been in FilmFreeway's Top 50 (#10 in Oct 2020) best reviewed international film festivals (out of 9000+) for the past 7 years. ... See MoreSee Less

NRFF AMSTERDAM #6 2022 has a fine selection of features, which will be streamed on Vimeo On Demand from 8-10 April. Programme: www.nrff.nlFollow our Instagram page @newrenaissancefilmfestival for stories and regular posts about this year's Official Selection. ... See MoreSee Less

NRFF AMSTERDAM #6 will be streamed this year on VIMEO On Demand, between 8-10 April. The Programme will go live soon. Visit www.nrff.nl Follow our Instagram page @newrenaissancefilmfestival for stories and regular posts about this year's Official Selection. ... See MoreSee Less

Method of Modern LoveWelcome to Love Story Film Festival 2022. This year's programme will be streamed via VIMEO ON DEMAND, from the 11th to the 14th February. Join our celebration of extraordinary art and talent.www.lovestoryfilmfestival.online ... See MoreSee Less

As we embark on a new era of technological and scientific discovery, Dreamers of Dreams Film Festival will spark your imagination and inspire you to think beyond the limitations of everyday life.